Remember how much fun it was when we were young and met people who would become instant friends? We saw them at the pool or the library or the park. There were many more people to meet at school, but it was not the same as having a close friend living next door or just down the street. So, it was hard if that person ever moved away. Even harder when dating that person and there were any questions of fidelity. The most difficult was being in love with that person who revealed their cruel and shallow soul. 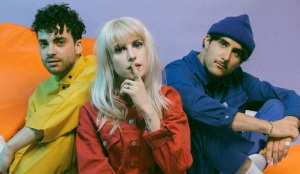 These seem to be the themes of the fifth album released by Paramore, the Franklin, Tennessee, Pop Rock Punk band. Members are guitarist Taylor York, vocalist Hayley Williams and drummer Zac Farro. This album entitled “After Laughter” was co-produced by Taylor and rock music producer Justin Meldal-Johnsen. As of this publishing date, their A side top track, “Hard Times” peaked at the #6 position in the Billboard Hot 100 singles in the Rock Songs category, but is making another run at the top, moving up again from the #29 spot to #27.  The band’s style is reminiscent of Blondie with Deborah Harry‘s skill at singing with an inviting voice over up-tempo beats while delivering pensive and too real lyrics.

I know what you’re thinking.  I am writing about their song “Fake Happy.” It received serious consideration. In the very same way that the honorably mentioned Three Degrees received a review, and it was the happy tune that placed it out of contention – for both songs. For Paramore the song that had the punch and real grit of a sad song was dealing with a very toxic relationship. It was the kind of relationship that makes you cry, that hits you in the face, that makes you want to quit and keep on fighting at the same time.

Why do we put up with a loved one who keeps breaking our heart? Unfortunately, no one knows this answer. Some famous broken-hearted person once said, ‘the heart wants what the heart wants.’ That’s just a lie we tell ourselves when the other person becomes more important than our own identity. So what happens when we do this?