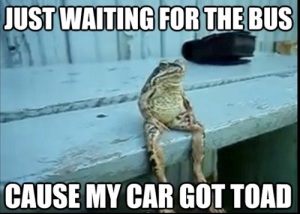 but not mouse meat – which is probably all a cat wants.

The invention of the shovel was groundbreaking.

Tired of waiting in the back of the line to get on Noah’s Ark, a flea jumps from one animal to another as she moves closer to the front.
She leaps and leaps until she lands on the back of an elephant.
The pachyderm turns to its mate and says testily, “I knew it! Here they go with their pushing and shoving!”

How do you turn a duck into a soul singer?
Put it in the microwave until it’s Bill Withers.

NASA launched seven cows for a herd shot around the world.

A panda walks into a bar and gobbles some beer nuts. Then he pulls out a gun, fires it in the air, and heads for the door.
“Whoa!” shouts the bartender.
But the panda yells back, “I’m a panda. Look it up in the dictionary.”
Sure enough, the bartender read: “Panda: A tree-climbing mammal with distinct black-and-white coloring. Eats shoots and leaves.”

A horse walks into a bar. The bartender says, “Hey.”
The horse says, “You read my mind, buddy.”

A guy walks into a bar and finds a horse serving drinks. The horse asks, “What are you staring at? Haven’t you ever seen a horse tending bar before?”
The guy says, “It’s not that. I just never thought the parrot would sell this place.”

A Frenchman walks into a bar with a parrot on his shoulder.
The bartender says, “Hey, that’s neat. Where did you get that?”
The parrot says, “France—they’ve got millions of them there.”

A dog goes into a bar and orders a martini. The bartender says, “You don’t see a dog in here drinking a martini very often.”
The dog says, “At these prices, I’m not surprised.”

Cows have hooves, instead of feet, because they lactose.

Read about it here: https://marsearth.wordpress.com/about/